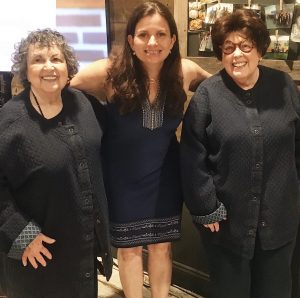 Oh, my goodness! You must bring Sheila & Marilyn to meet Alex Josza Bodnar in Pittsburgh. He is from Hungary and has a unique eatery in his home AKA Josza’s Corner. Alex is very personable and welcoming and he’d be wonderful with Sheila & Marilynn, showing them how his grandma taught him how to make so many tasty Magyar dishes. Hungarian dishes simply must be on their bucket list! Come to Pittsburgh!

Thanks so much for tuning into the show, Mary,and for the tip on Chef Alex. We’ll keep it in mind for the future – sounds delicious! Hope you enjoy next week’s episodes!

My Mom and I saw both episodes back to back last night and LOVED the Brass Sisters adventures. Keep up the good work – hope there’s a second season in store!

Thanks so much for your kind words!I hope for a second season too!!!

My 93 year old Mom and I watch Food Flirts as part of our Saturday culinary programs. We love it and it makes me laugh. The sisters are wonderful and I feel a bond with them because I learned to cook from my Mother too! My mom was a fantastic cook and she has been watching cooking shows on PBS and Food Network for 40 years!

Thanks so much for the nice feedback! I’m so glad that you and your mom enjoyed the show. that’s wonderful to hear that your mom has been a PBS and FN viewer for so long. Thanks again for writing!