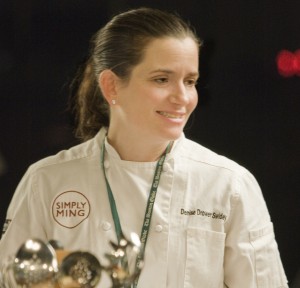 I’m a Boston-based television producer, food stylist, food writer and culinary instructor. I am the supervising producer of PBS’s, The Food Flirts with Marilynn and Sheila Brass. The program, a James Beard Foundation award nominee in 2018, airs in primetime. Check here for the schedule in your area . I worked on a dozen seasons of PBS’s Simply Ming, holding several positions including culinary producer, for which I earned an Emmy Award nomination. I’ve also served as culinary producer for Steven Raichlen’s Project Smoke, and A Moveable Feast with Americas Favorite Chefs, running the cooking operation for Rick Bayless, José Andrés, and four other celebrity chefs. The show was nominated for a 2010 James Beard Foundation Award in the television special category.

A graduate of the Culinary Institute of America and Tufts University, I got my start in TV food styling working for various Food Network shows. I’m a contributing writer for The Boston Globe’s food and travel pages, have recipe-tested for The New York Times Magazine and other publications and am a private cooking instructor and visiting college lecturer. In  2020, I designed and taught a popular class on food media at Tufts University. I also am an on-air chef for the web-based video service How2Heroes. My husband and I have three daughters (who all love to cook).

About Culinary Production and Food Styling

I specialize in production and food styling for television cooking shows, supporting on-camera chefs and talent from behind the scenes, as well as still photography styling. On-camera chefs are (often) truly creating those amazing dishes before your eyes, but because they tape multiple shows in a day, they need a point person in charge of every imaginable detail that goes into putting together a cooking show. Plus, cameras are not going to stand by patiently while the chef minces four large onions or the chicken roasts, so the kitchen staff has all those bases covered with swap-outs and beauties.

The culinary producer on a television show is like an orchestra conductor, coordinating all food operations, from recipe development, to shopping, hiring food stylists, sourcing ingredients and equipment, etc.  The craft of food styling (making the food look great when its ready for it’s close-up)  is part of the culinary producer’s work and is one of the best jobs on this planet.