It only took three New England snow storms to finally nail those yeasty, caramelized, rich liège waffles! They get their sugar coating from Belgian pearl sugar that’s folded in after bulk proofing. These waffles have been making the scene in major cities and on ski slopes at $5 a pop. Here’s the recipe I used.  I ordered my Lars Own Pearl Sugar on line, but hear you can chop up sugar cubes as a substitute. 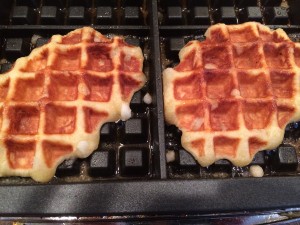